Tickets for QE Theatre Academy’s production of Titanic – The Musical are now on sale from the School Library at Western Road! Call 01363 778365 to book.

The performances run from Tuesday 30th January to Saturday 3rd February starting at 7.30pm, with a matinee performance on the Saturday starting at 2.30pm, taking place in the Drama Hall on the Western Road campus.

A large cast of students from Year 9 – 13, including Charley Roberts from Year 7, have been rehearsing since the beginning of October and as we head for the Christmas break, things are coming on apace.

With story and book by Peter Stone and music and lyrics by Maury Yeston, the piece is a re-telling of the tragic sinking of RMS Titanic on the 14th April 1912, when over 1,500 people lost their lives as the ship struck an iceberg on its maiden voyage from Southampton to New York. Yeston’s beautiful score takes the audience on an emotional journey, from one of excited anticipation and hope, to its ultimately tragic end.

The wonderful sets, designed and crafted in-house by Mike Crooks and Robert Logan, are already coming together, with the task of recreating such an iconic setting being this year’s challenge. Lucy Welsman is working her magic once more with our ever-talented orchestra, and supporting the cast in rehearsals this year, as rehearsal pianist, is Year 9 Daniel Toll who has taken on the mantle of Sam Hatchell.

Make sure you get your tickets fast before they sell out and come and join us as we set sail for Titanic’s historic maiden voyage!

Previous production of West Side Story: 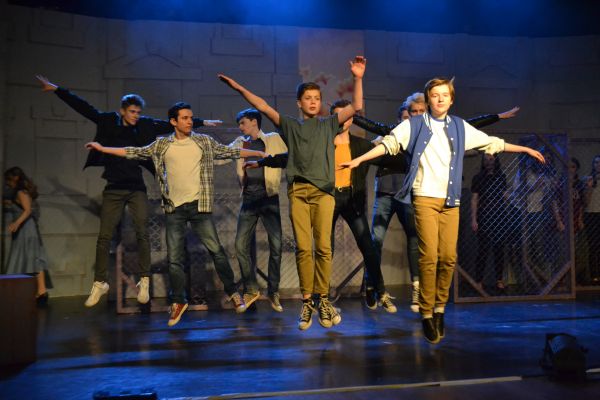