Tickets are now on sale for QE Theatre Academy’s next production, Legally Blonde – The Musical. The show runs nightly from Tuesday 31st January until Saturday 4th February with a matinee and evening performance on the Saturday.

Legally Blonde is a 2007 musical with music and lyrics by Laurence O’Keefe and Nell Benjamin and a book by Heather Hach. It is based on the novel Legally Blonde by Amanda Brown and the well-known 2001 film of the same name starring Reece Witherspoon.

The show tells the story of Elle Woods, a sorority girl who enrols at Harvard Law School to win back her ex-boyfriend Warner. Throughout the show, very few characters have faith in Elle, but she manages to surprise them when she defies expectations while staying true to herself.

Legally Blonde premiered on Broadway in 2007 and transferred to the West End opening in January 2010 at the Savoy Theatre. The West End production was nominated for five Laurence Olivier Awards and won three, including the Best New Musical award.

Directed by Head of Drama, Vicky Evans, with musical direction by Head of Music, Lucy Welsman, and the chorus being put through their paces by Emily Morgan, rehearsals are in full swing, and this year’s cast are whipping themselves into shape to be ready for February’s performance.

This is a truly uplifting and energetic show full of great show-stopping numbers that can’t help but brighten up a dark February evening. Tickets are available through our online booking service, scan the QR code on the poster or follow this link to select your seats. https://www.ticketsource.co.uk/qe-theatre-academy (Adults £12, Students £10). 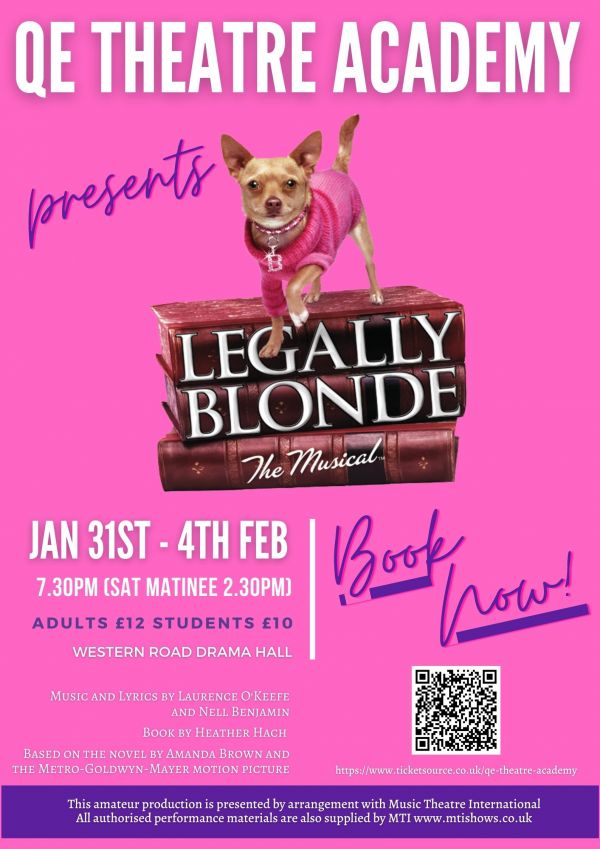